Happy Pride, Vancouver! I might be going to the parade today and then Bard on the Beach after dinner downtown with Branden's parents. MAY also take my towel and a change of clothes and makeup down with me and dunk myself in the ocean - my first time swimming this summer. It has not been good times for me lately, man.

Anyway, y'all know pride means rainbows so here's the toolkit from left to right: 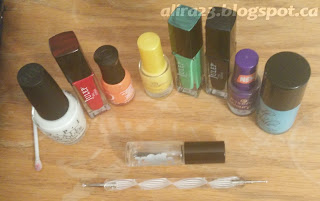 After swatching CN Nakizzle's Shizzle and covering that with ILNP My Private Rainbow, I frenched the tips with OPI Alpine Snow, the best white ever. 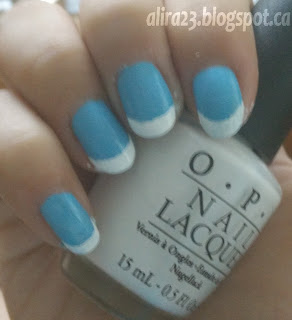 Manually! Freehand! (I didn't have time to wait for the polish to dry enough to put down paper reinforcements.) 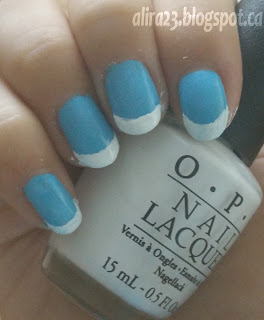 Then, just on the tips, a dab of each of those colours. 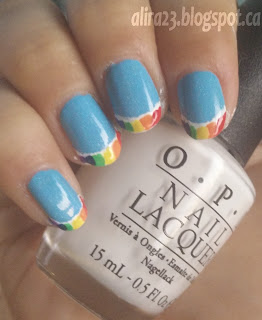 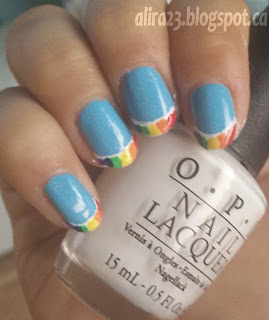 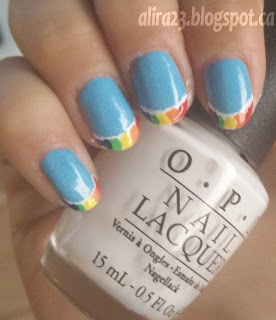 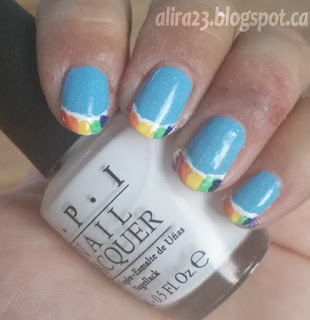 Because there was no way to get the white strip even, I used the dotting tool to give the sense of fluffy clouds. 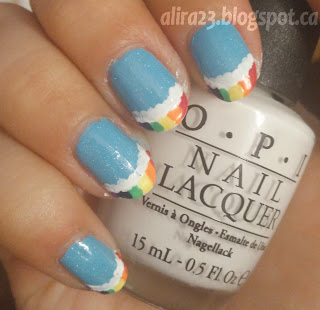 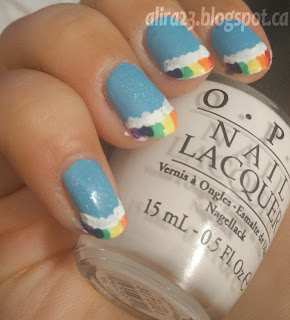 Look at that glorious mess. 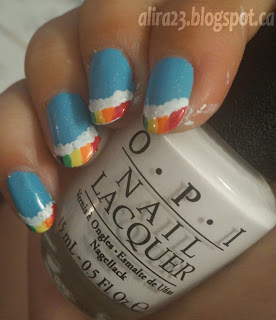 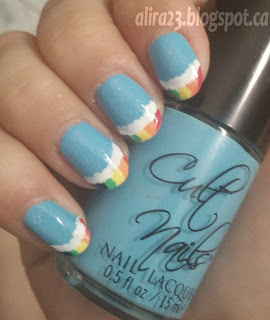 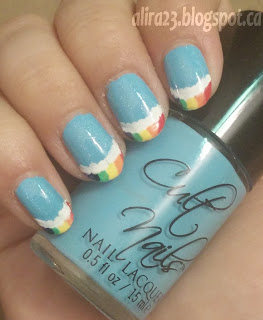 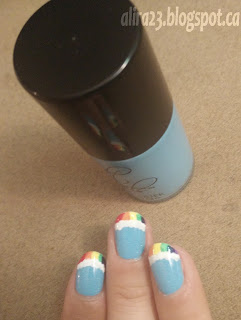 I like it! It's a little bit subtle but still pays homage to Pride.

Gonna stand on my soapbox here for a second. It's pretty great that the US finally joined the rest of North America in allowing its citizens to get married, but in many states it is still perfectly legal to be fired immediately upon exercising their civil rights. On top of that, with queer visibility increasing children are coming out younger and younger which leaves them vulnerable to the wills of last-generation bigoted parents. In the US, estimates of homeless queer youth (limited to lesbian, gay, bisexual and transgender in their studies) approach 40%, with an incredible overrepresentation for trans* youth. Many are driven to suicide. Pride, and visibility, is a celebration of life, a challenge to the laws and societies that oppress people based on who they love and important in the light of the terrible laws being passed in places like Uganda which allows a lifetime jail sentence just for falling in love (or for fucking, and whose business is that?). My point is Pride is important. And whatever you dis/agree with, if you ever vote to change laws to take people's rights from them, you are a piece of shit.

For the sake of visibility, I'm bi. Queer rights are human rights. Keep fighting and if you're not straight/cis and struggling, remember there's resources to keep you going until you can get out of the terrible place you're stuck in at the moment.

This weekend, celebrate, have fun, exist and be safe!