Hi guys, so here in Canada we are celebrating Remembrance Day tomorrow and I wanted to do some nail art featuring poppies.

In case you don't know, we wear poppies because of the famous poem "In Flanders Fields" by John McCrae. John McCrae was an artist, poet, surgeon and soldier in the First World War. And he was Canadian. According to popular folk lore,  McCrae wrote "In Flanders Fields" while sitting on the back of a medical field ambulance after presiding over his friend Lieutenant Alex Helmer's funeral. Poppies were abundant in the fields of Ypres. McCrae died of pneumonia in 1918 ten months before the end of the war.


In Flanders fields the poppies blow
Between the crosses, row on row,
That mark our place; and in the sky
The larks, still bravely singing, fly
Scarce heard amid the guns below.

We are the Dead. Short days ago
We lived, felt dawn, saw sunset glow,
Loved and were loved, and now we lie
In Flanders fields.

Take up our quarrel with the foe:
To you from failing hands we throw
The torch; be yours to hold it high.
If ye break faith with us who die
We shall not sleep, though poppies grow
In Flanders fields.

So I grew up hearing this poem read every year and I know the words almost by heart. I always get a little emotional reading it. If you're curious about John McCrae and his poem, all the information I wrote about was from Wikipedia and there is more there if you're interested.

Ok on to the nail art. I've seen a lot of poppy nail art before, but there was two really looked at as inspiration: Will Paint Nails for Food Freehand Poppies (here) and Set in Lacquer Popping Up With Poppies (here).

So I started with 3 coats of OPI My Vampire is Buff. This one has been a lemming of mine for a while now and I am really excited to finally get my hands on it. I will have it swatched alone sometime this week. I did the poppies using polish mixed with acetone to give it a water-coloured look. The poppies are primarily Sephora Cherry Popsicle (swatched here), with Sephora Dangerous (swatched here) as a shader. The stems and greenery was China Glaze Exotic Encounters. I used Essie's Matte About You as the matte top coat. There's a step by step at the end!! 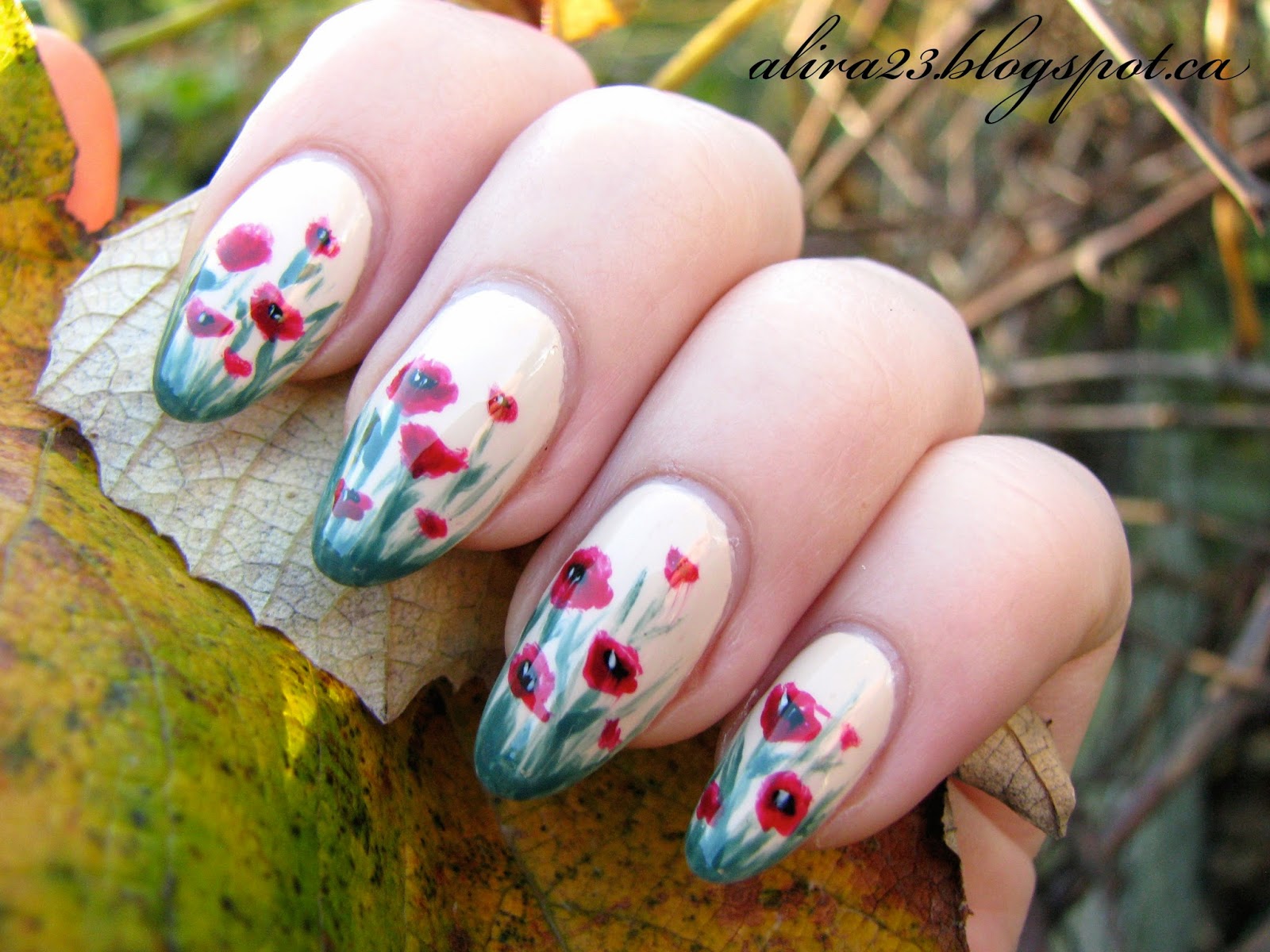 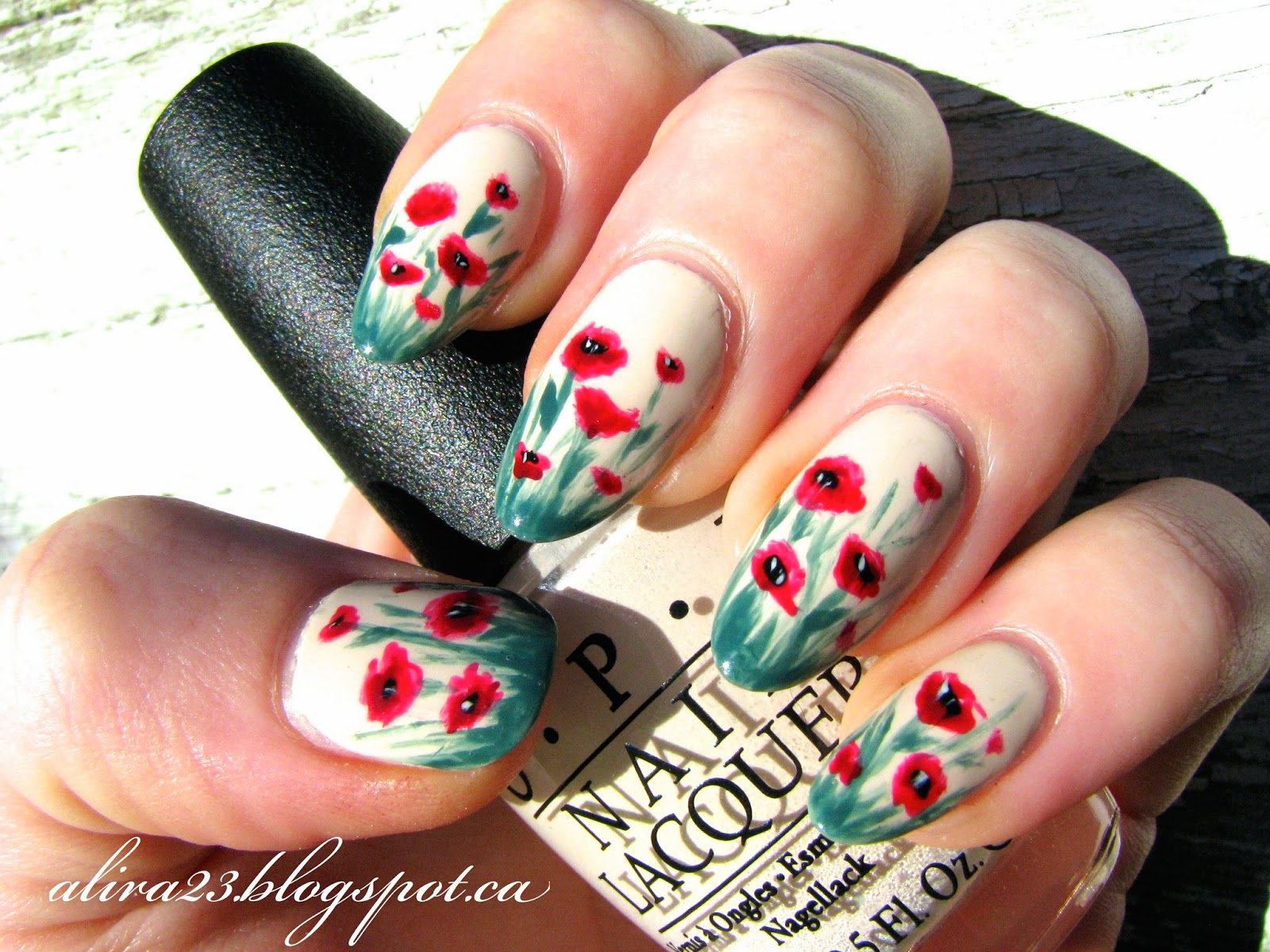 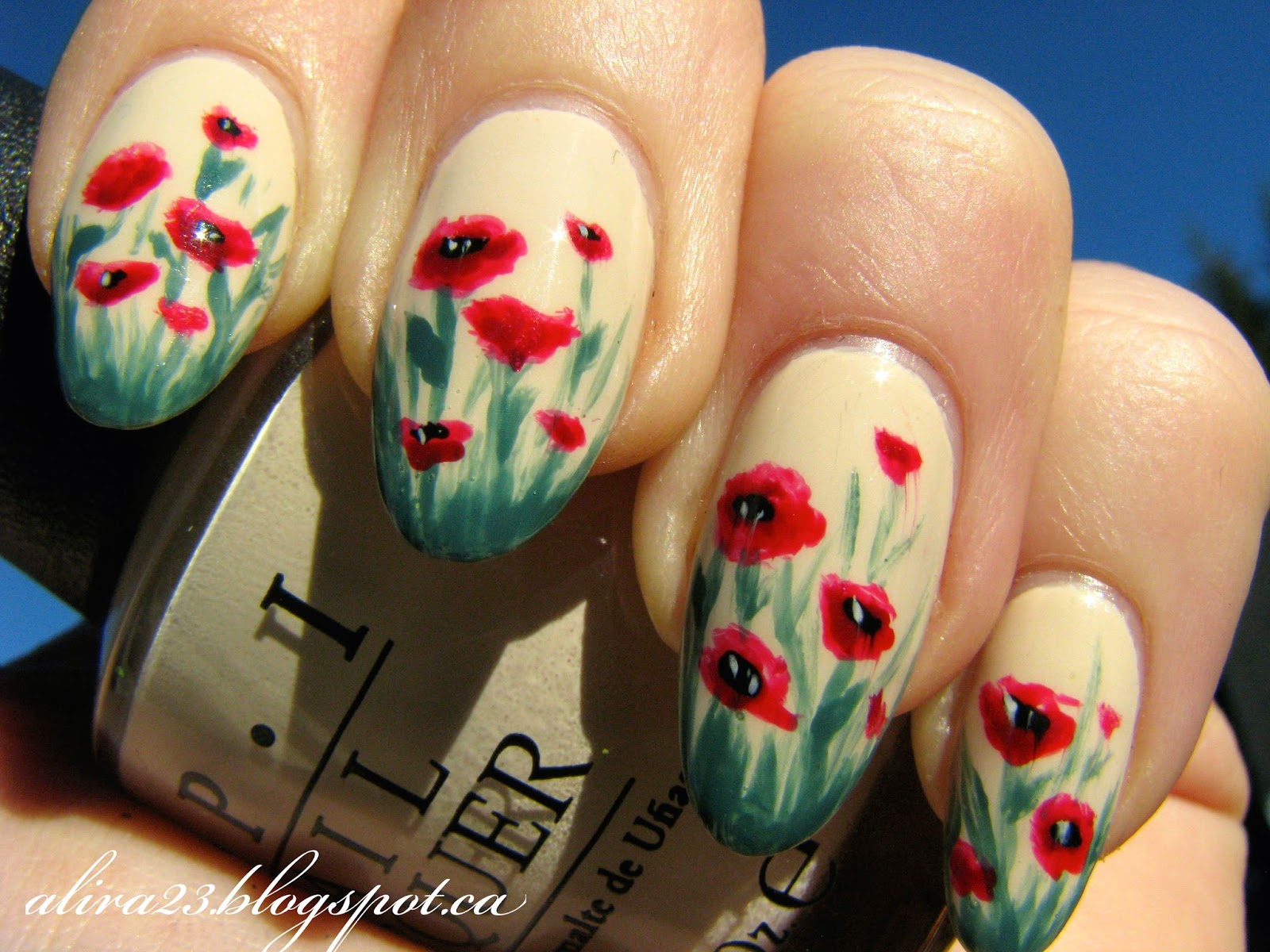 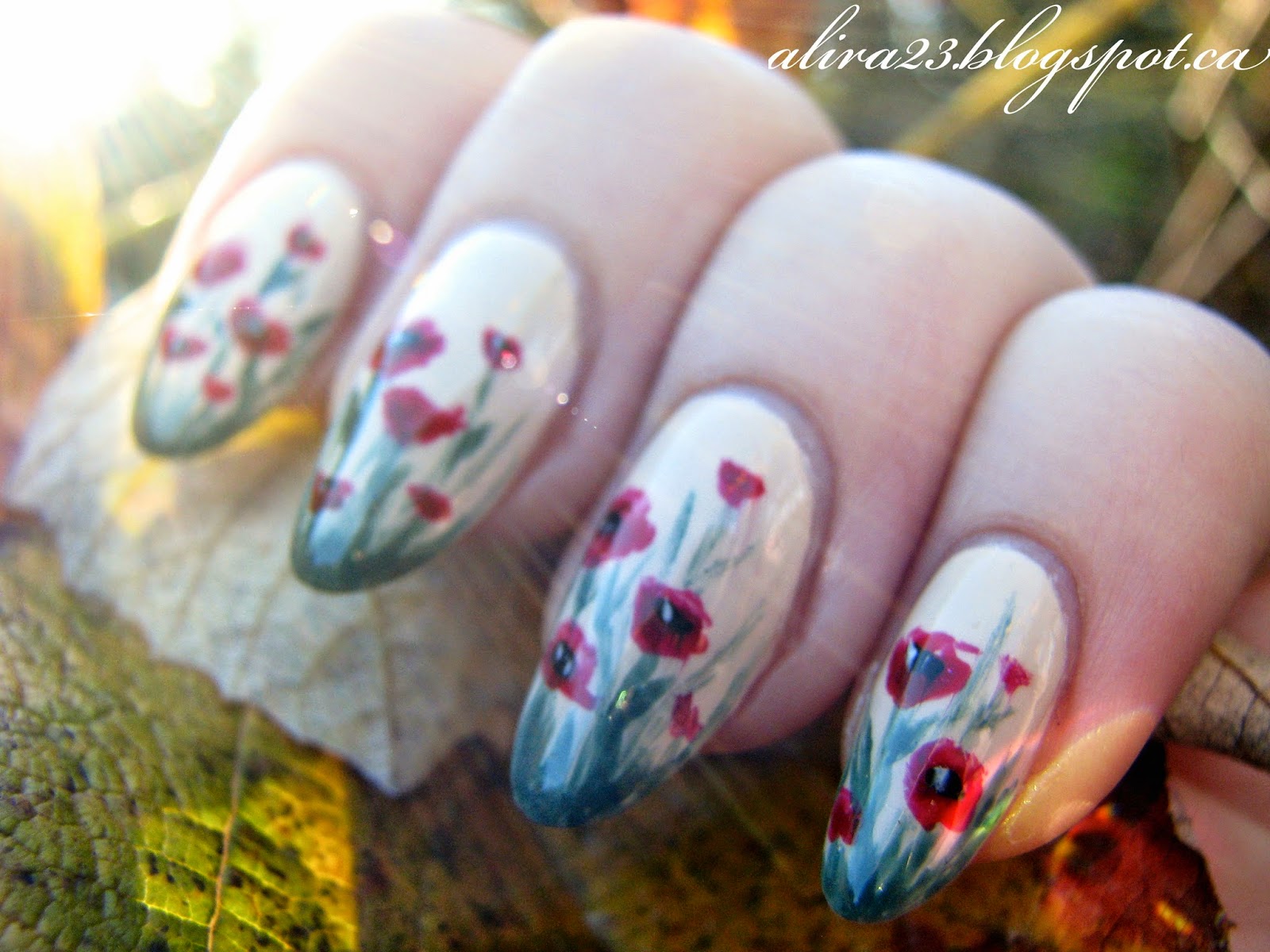 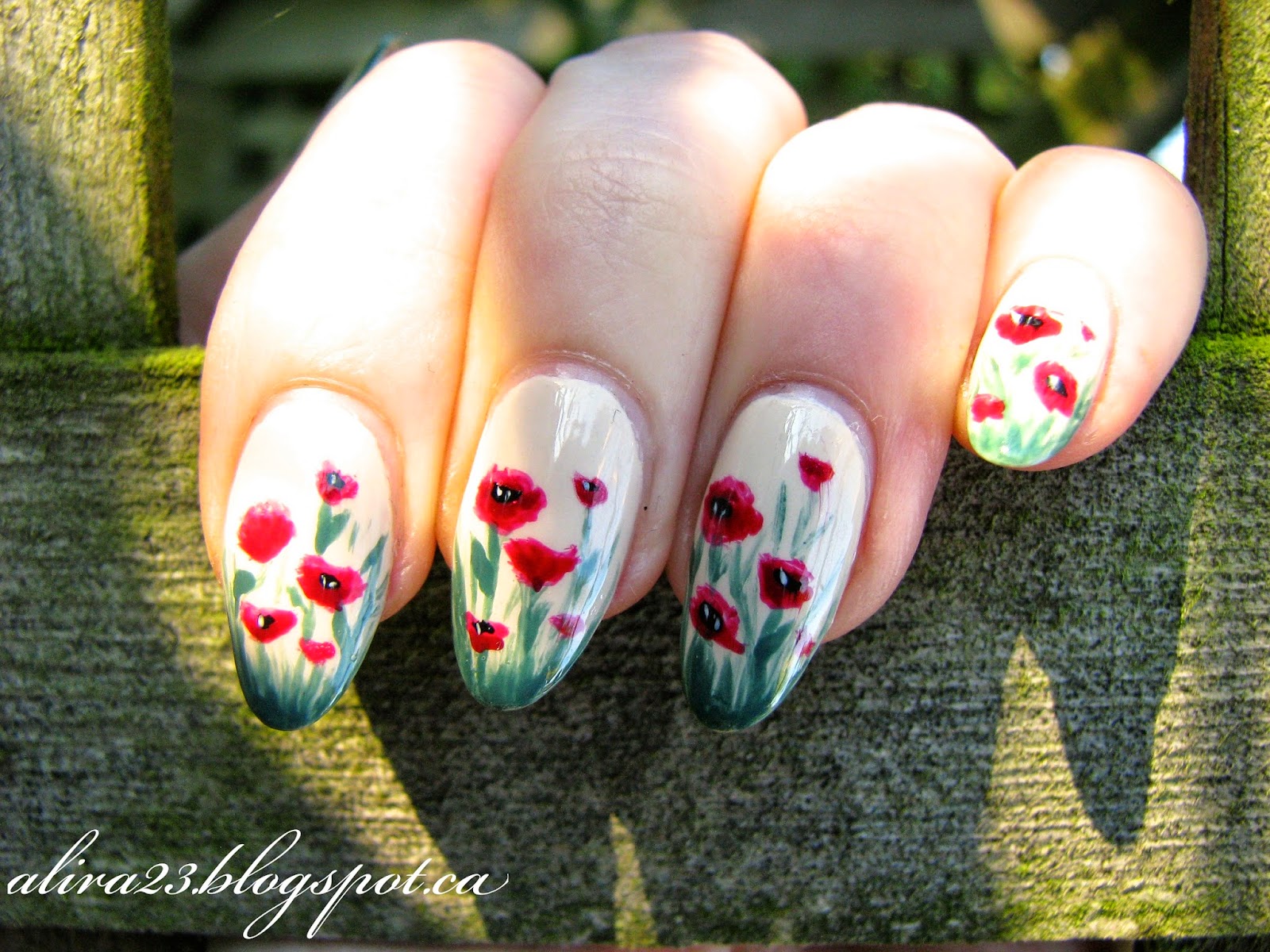 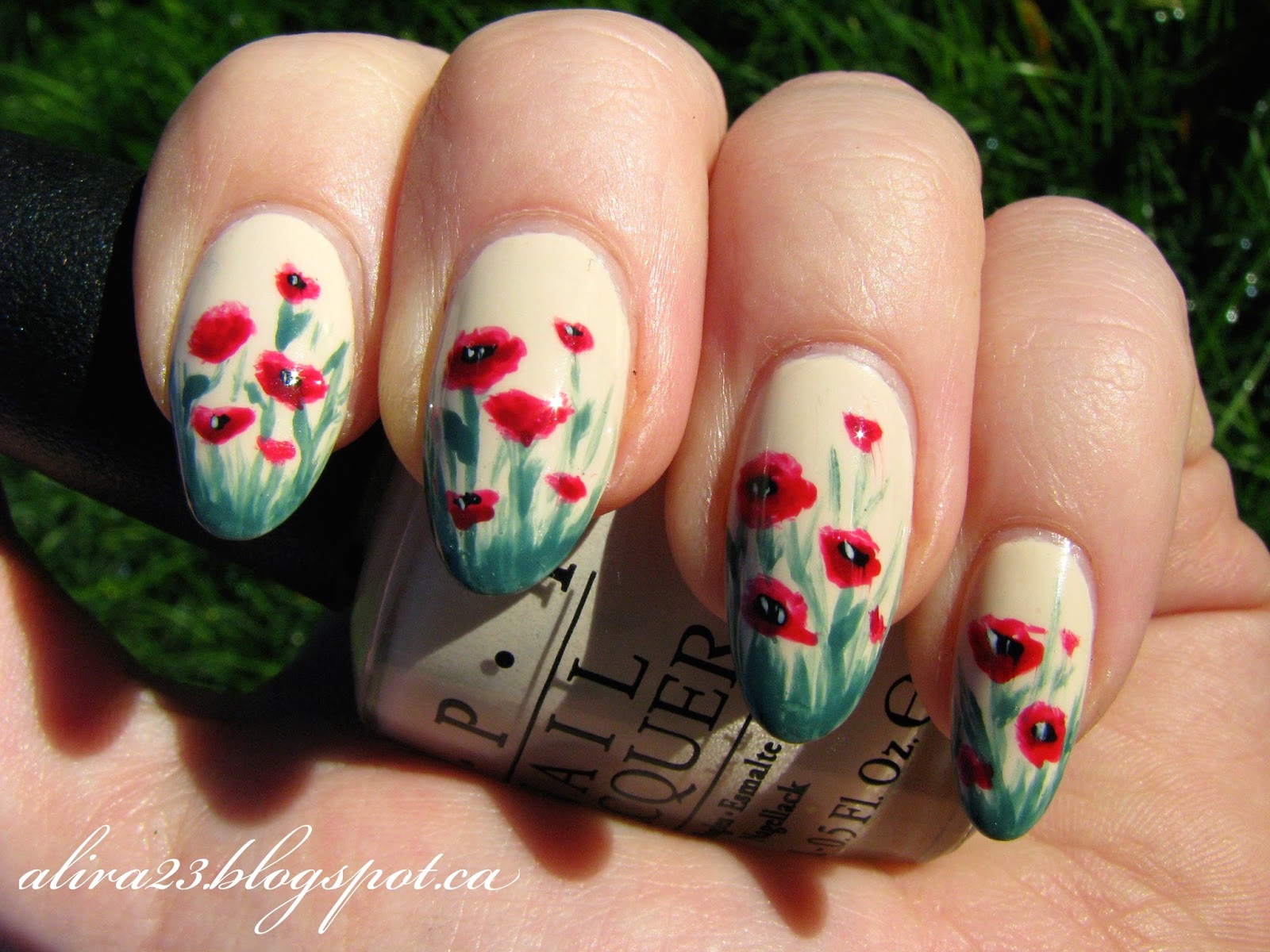 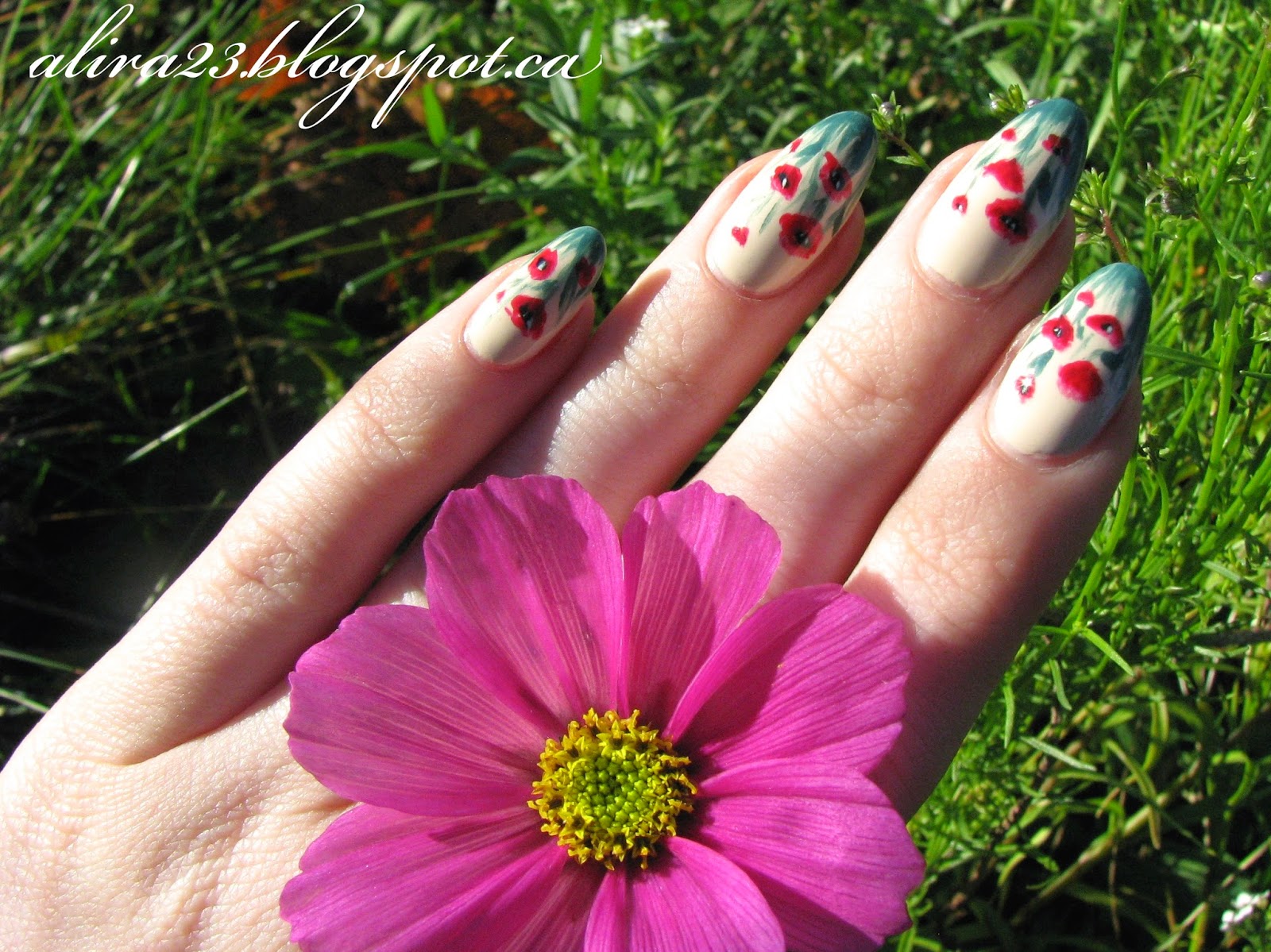 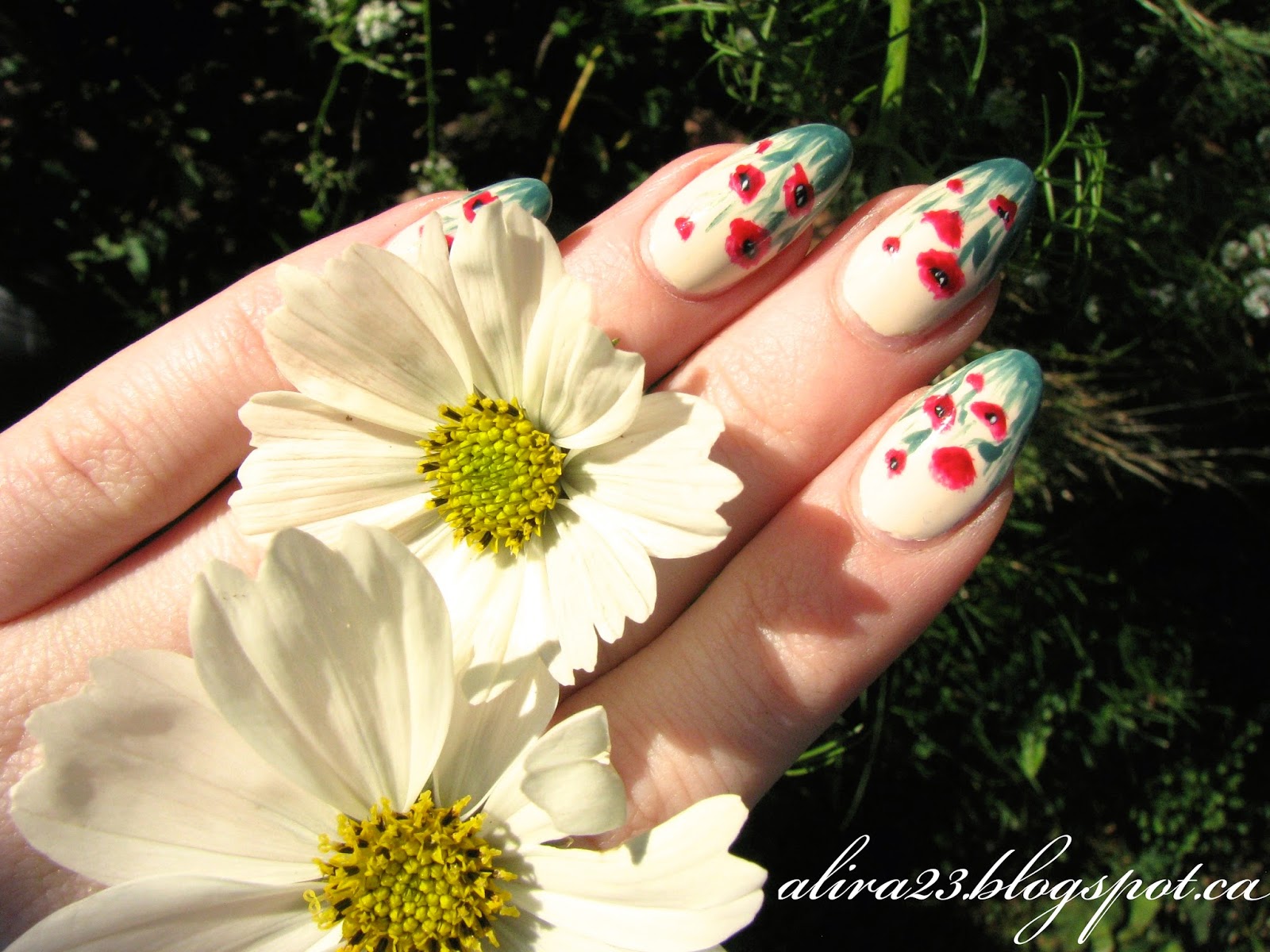 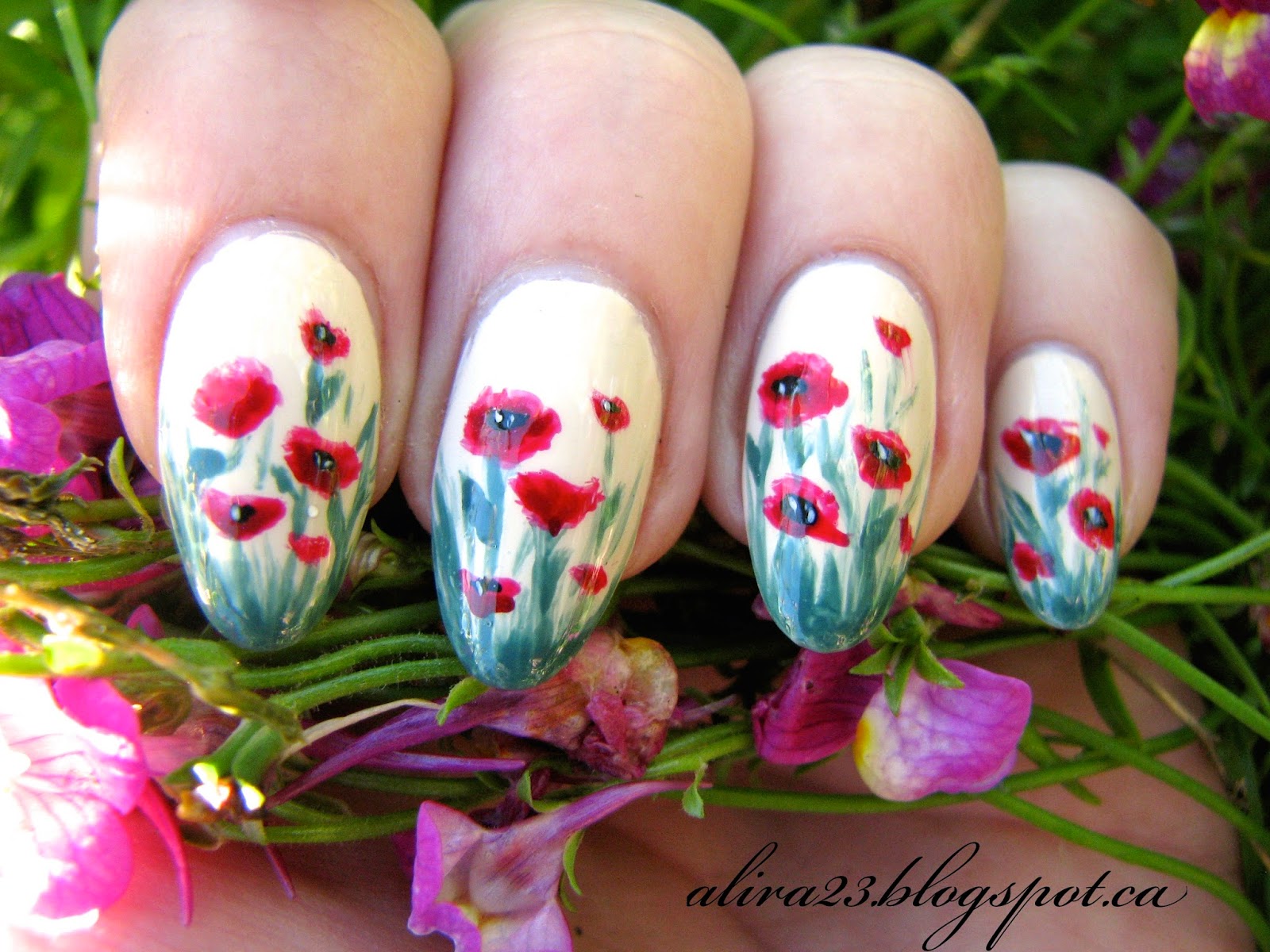 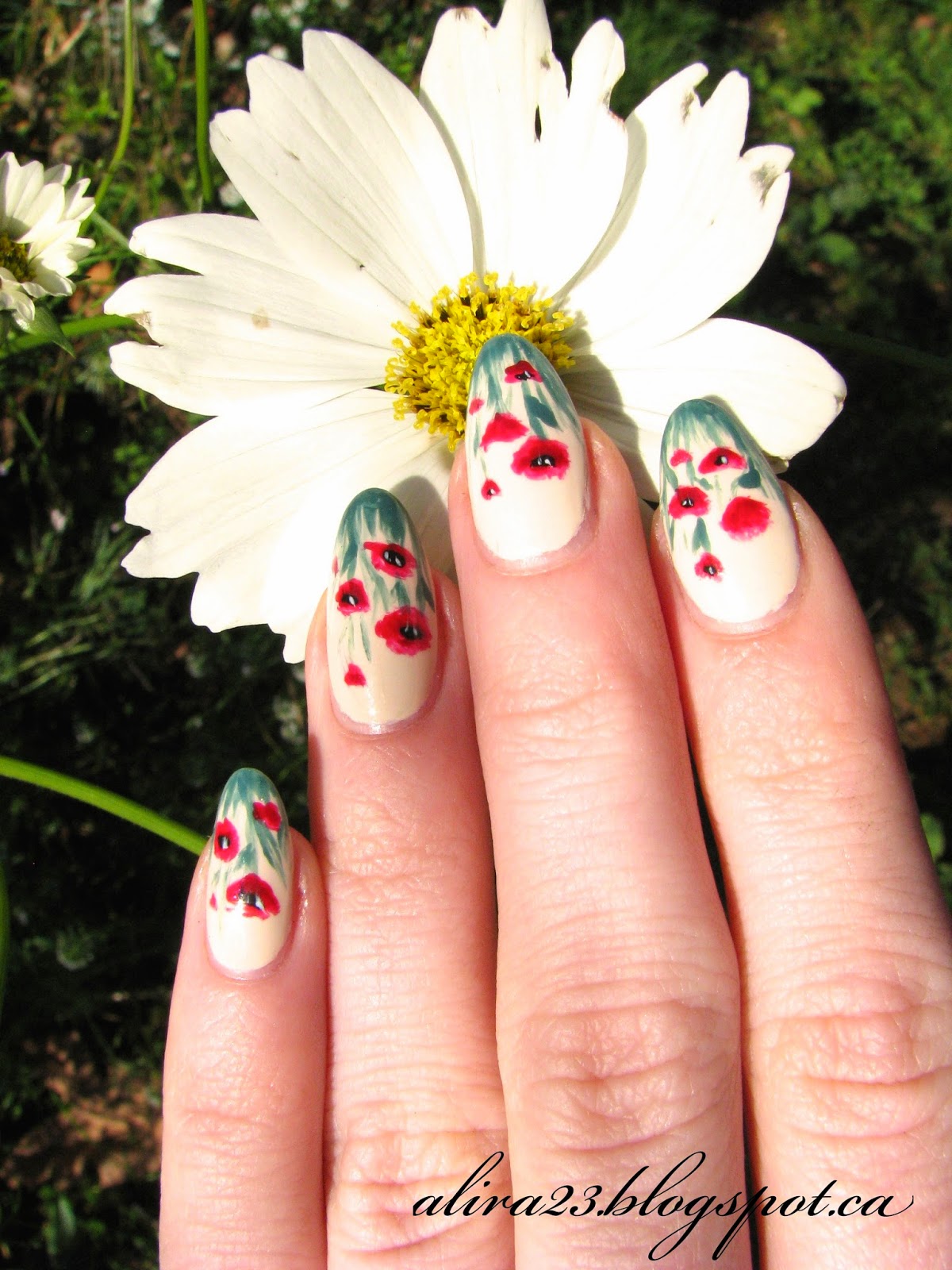 I hope you guys have a good Remembrance Day if you celebrate it, and take a minute to remember the people who have sacrificed for our countries.