Alyssa from Frugal Polish is having a nail art contest on her facebook page and here's the rules!

So I'm trying to figure out how to do this... I did this on one of Branden's nerd nights so I stole his desk. The background is his miniatures and paints.

The list of polishes: Essence Black is Back, Wake Up, Wanna Be Your Sunshine, Sally Hansen Blue Me Away and Julep Marisa. Ulta Snow White was on the first design (a fail, look forward to it) and Essence Walk on Air I brought but didn't use.

In these pictures you can also see my Julep cuticle oil, Truly acetone, the little bottlecap of another remover bottle and a make up sponge + an old fraying paintbrush I use to paint details. I also used one of my dotting tools on the failnails. 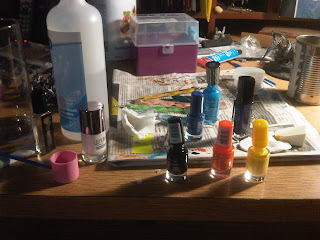 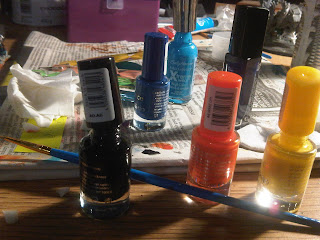 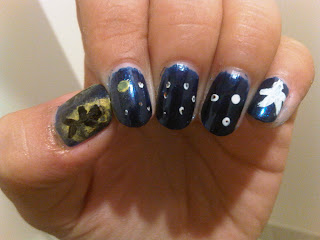 So here is my left hand, which I forgive for failing because I AM left-handed, and was unable to paint on it that well. It's SUPPOSED to be the flight to neverland with Tinkerbell a tiny little light there, and fairy dust pouring off the children. Instead there's too much yellow and it looks like Goku powering up to defeat Freiza. GOOD JOB SHARRA.

So onto the real thing. Who recognizes this image? 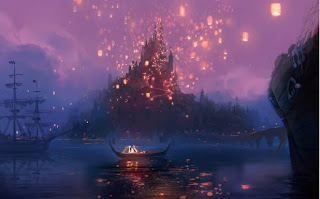 It's from Tangled! If you don't recognize it, I recommend getting your hands onto this movie. It's a fantastic story about Rapunzel and this is the climactic romantic scene, which I wanted to recreate on my nails. Ready? =D

Started with Julep Marisa from the last post. On the thumb, index and middle finger, I sponged on varying amounts of Sally Hansen Blue Me Away to create a gradient. Then I sponged on Essence Wake Up in spots around my nails. I painted on some more Wake Up and then dotted in some Wanna Be Your Sunshine.

On the thumb I had my fun =) Using Black is Back I painted in a little boat, and two people sitting there... 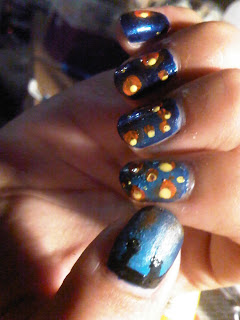 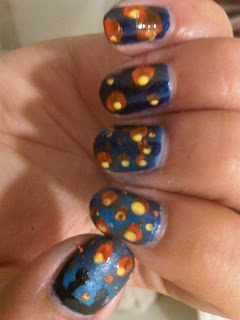 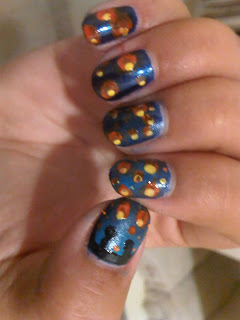 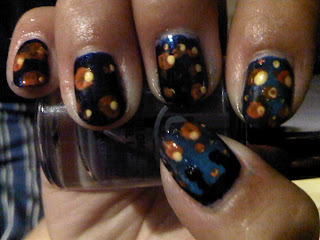 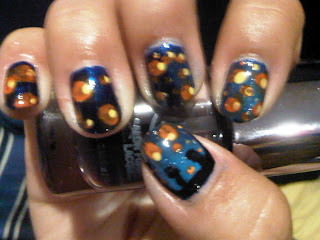 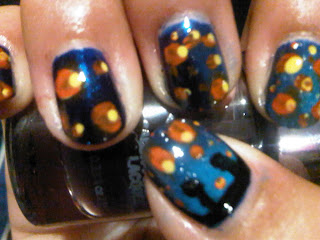 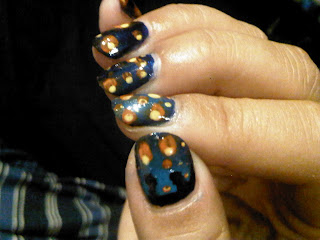 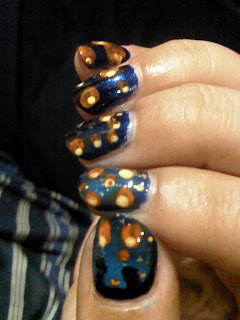 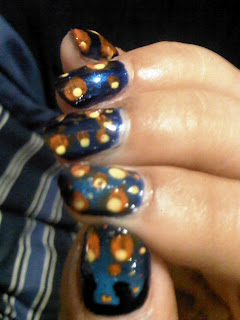 THERE IS YOUR MASSIVE PICSPAM. What do you think? It's not extremely in your face princessy/disney but I hope that's alright. Cross your fingers for me guys! =D
Posted by Unknown at 7:26 AM