Monday was my birthday! I'm old now, so just before, on the weekend, my boy and I made an overnight trip to Lynnwood near Seattle. I'm just gonna picspam you with cute little animals, so you can stop reading here if you want to. There will be a separate post soon for food.

The first thing that baffled me. Apparently in the US, you don't read signs, and you call things as you feel like it. "Look a peacock!" is not a valid response to seeing this bird. It is clearly not a peacock. Peacocks are blue, with green and bronze and giant eye tails, not brown and spotted. Clearly, there is a sign right in front of you that says Malay Great Argus. Please people, teach your children to read!

I wish they sold owl pellets! Or little necklaces made of mouse skulls and such from the owl pellets. Is that creepy? I want one.

Oh man, these things were so cool! They inflate the pouch at their throat (see the guy on the right?) and it makes this big inhaling noise, and then do this song that progressively gets faster. They sing in duets. The male starts singing, then the female, and then they screw. We didn't actually see that last part but it was pretty cool to see them singing! They were LOUD and went for quite a while.
I dunno, I guess I watched more Kratt's Kreatures than the average kid?

Here's where I start getting pissed. There were signs that CLEARLY said "STFU, the animals are sensitive," and I swear every little brat that went up to the glass was SCREAMING. AND their parents. "LOOK KIDS, A LIZARD." Oh my god, do you run up to cats screaming your head off when you want to pet them too? Actually, probably. It was very frustrating to sit there waiting for a bird to come closer to the glass, just to have some brat run by right up against it wailing just for the sake of making noise. Look, you're in a public place, you're surrounded by animals, not all of which are behind glass. Making me want to push your child in is not a good idea. The tiny tots were quiet (AKA sleeping) but at 4 years old, you have to start to teach them that they're not monkeys, they're looking at living things and that means shutting the hell up. It's just... ugh. It came up at the gorillas too. That is a sensitive animal, capable of learning sign language to communicate. It's not going to come see you if you yell. That's a creature that might actually wave back when you say hi. It really bothers me. =/ 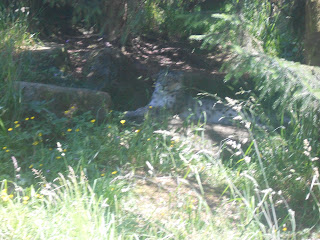 One thing this zoo did really well with was aviaries. I wish the Vancouver Zoo had aviaries. It was the coolest thing to have them flying around, and this one space they had, they sold popsicle sticks stuck with seeds so the birds could fly down and sit on your and eat them. I taught Branden how to get on to sit on your finger and it was one of his favourite parts =)


This made me a little sad because these are smart birds. Look up some youtube videos. In such a small enclosure with no friends and nothing to do =/ Stimulate it! Gah!

And the cutest thing in the entire zoo...
He is much cuter in person! The telus commercials make it seem ugly but it's so adorable! It came out right on at 6 when they were kicking us all out. This sucks, because this was the time when everything was waking up. The Greater Vancouver Zoo is open until 8 every day during summer, so I can't believe the popular Woodland Park Zoo couldn't stand another 2 hours. I think it's crap. I wish we'd had time to walk around a second time. The other thing is this zoo is very disorganized. There's a lot of overlapping and backtracking to be able to see everything. And this is not even close to everything, I just couldn't get good pictures (or didn't want to post things I'd seen in the other zoo.

I think I need to go again. During late summer/early fall sort of, when the days are getting shorter but the entrance fee is discounted =P This way the animals will be active earlier and maybe we can see more. It might also be less croweded, and I didn't get to go on the historic carousel!

Has anybody been? Are noisy brats an American thing? What's your favourite critter?
Posted by Unknown at 1:27 PM