Oh, my gawd, this has to be THE worst polish I own. Cecile 77 may have bubbled a lot, but nothing holds a candle to Julep Kate. I am SO annoyed right now.

Julep Kate is a white creme with a little pearly shimmer that looks SO pretty in the bottle. I wanted to pair this with Julep Melissa and have a simple but pretty and eye catching *cringe* manicure. However, Kate was having none of it. I had to try 4 times (That's applying and removing cycles, 4 of them) before I gave up and decided this was no longer my fault. 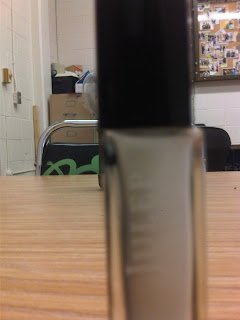 So there were bubbles. And unlike with Cecile 77, I couldn't see them on the brush, and I couldn't pop them with a dab of the q-tip soaked in remover. Fuck you Kate! On top of that it was SUUUPER THICK and I don't know if my brush is weird, or it's just that thick. Because I had to try so many times, and it's so bloody thick, I've used almost a third of the bottle in the last two hours. I ended up putting on 3 coats and giving up. This is worse than Ulta Bam-blue-zled; at least that one went on nice, even if it took some building!


These are the best pictures I could get, on the fourth try. You can still see it's uneven from bald spots that I had to cover up and you can also see the enormous BUBBLES. On both hands too! The first couple times I did it and waited for it to dry, I also had this tiny pattern of tiny bubbles all over the nail. How could Julep fail so hard? I am not impressed.

I finally decided to cut my losses, and added Julep Melissa on anyway. I've used about the same amount of Melissa as Kate, except Melissa's done like 8 manicures and Kate couldn't get through one.

After I finished putting all that together up here, I glanced at my nails again. Guess what? Melissa bubbled. A lot. Everywhere. Fuck you too.

At least it's pretty from a distance....

I went home and took all off and used Ulta Snow White.

Stupid Kate. It's thick so I'm going to retire it to stamping. Hopefully I can get some use out of the half bottle that's left. =/

I decided I wanted a little bit more on it, so I added a Julep O Canada to my ring finger.


All around fail but white nails make me feel so classy!