Saturday we made the trek out to Davie St. for some La Belle Patate. They have a small, medium and large size for poutine, which is immensely exciting. I settled for a medium instead of succumbing to my stomach's idea of hunger.

Branden and me both felt enormously whaley for the next three hours. It diminished after the walk we made from Davie to Waterfront, but still, it's not cool. You know it's bad when even I feel overgreased.

Both Branden and I agreed that Dunn's Famous is still the winner.

Oh, we also got a bunch of free stuff because there was some Bollywood thing going on by the Vancouver Art Gallery. 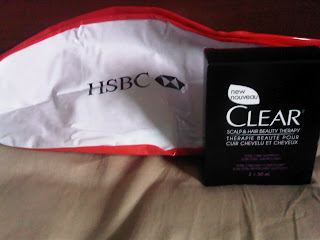 So I got a Shampoo and Conditioner sample which is gonna be awesome to try, and an HSBC beachball. Branden also took home one of those collapsible frisbees and we got a sample of popchips which I ate before taking a picture (duhhhrrrr).

Sunny Saturday full of free stuff. Beyawesome =)
Posted by Unknown at 9:43 AM