It's been a while since I've touched a Julep, hasn't it? I stopped getting boxes, and the mystery boxes kept being lame and then went up in price by $5. This is from the trick or treat box, where it sounded like everyone would be getting a scarf or bracelet or ring and I bought in thinking I had a chance at the scarf. When they fixed their language in a comment halfway down the page on their ad photo I cut my losses. I got a really cool glitter out of it, and Parker, and then I found out I could get the scarf online for $2. Lols, Julep, F--- you =D

Anyway. Parker is a neon-y orange that reminds me of cantaloupe flesh I think. The first two coats left some pretty bad bald spots in the lighting I was using but the third coat worked out. It was definitely opaque in two though, in spots. I also like the formula. 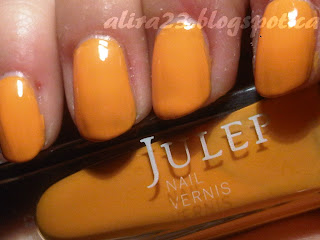 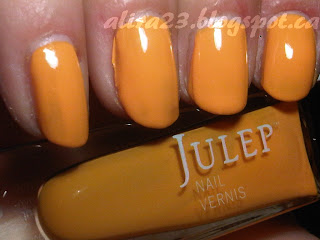 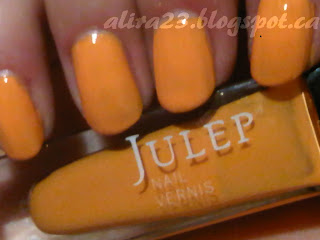 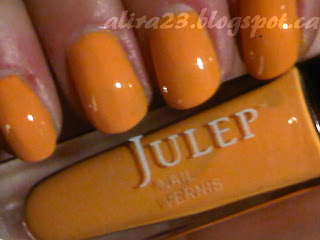 At first I thought it made me look really lobstered but it's kinda grown on me now.

I'm going out to a party with these so I decided they needed a little extra. I added Rainbow Honey Frozen Flame (one of my all-time favourites <3) 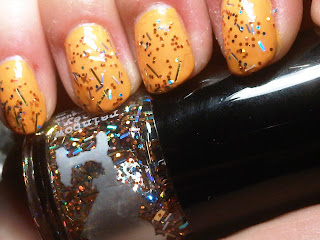 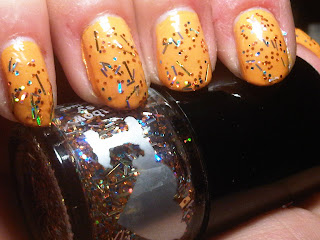 Good combo? Bad combo? Tell me what you think =3
Posted by Unknown at 9:00 AM