First, I'd like to say I found the first bug in the watermark program: it doesn't mark my non-nail pics! IT KNOWS SOMEHOW! *cough* Anyway, the boy will get to this ASAP as I will pester him.

Okay, to post. It was my friend's kids' birthday party(ies?) and being socialized little girls, their favourite colour is PINK. Last year we made fantastic angelfood cake cupcakes with strawberry buttercream icing but hey, this year we have Gramma's vanilla whip icing which means we get to experiment! We were a little leery since the chocolating of the recipe didn't turn out nicely, but this isn't a dry ingredient so we dove right in after a bit of thought!

This was lots of fun. We modified the recipe a bit to avoid adding lots of fluid via pureed strawberries. So from before the original recipe was:

We modified this by using only half the milk (0.5CUP Milk) and adding 0.75CUP pureed strawberries. Our first step came out MUCH more dense and gluey which was to expected.

(Full instructions for this recipe here - nothing was changed, only ingredient measures as noted above)

Cupcakes were made with Betty Crocker Angelfood confetti cake.
I forgot how marshmallow-y they are pre-baking! Teehee~ They poofled up nicely =)

I didn't get a photo of our lumpy glue paste but it was extremely relieving when we added the strawberries and the icing whipped up just like there were none! These next two pics is where I try to show you the pretty pink it became but alas, kitchen lighting was not my friend. 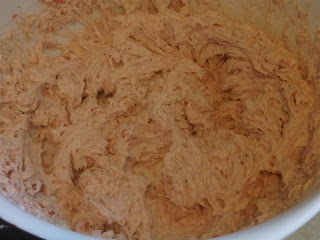 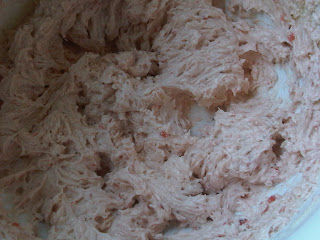 That's okay though, because you can see it in the next photo!

This icing is PERFECT for piping! Lookit my pretty lines =D If I'd had the patience I would have flowered the whole thing xD As it were, Branden covered up the middle with chopped strawberries, which is where the rest of our $3.98 package went. I think they worked out quite nicely! 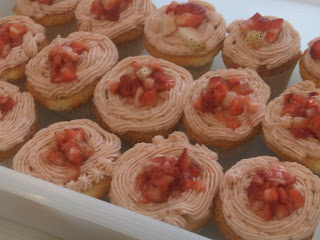 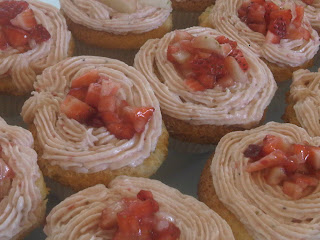 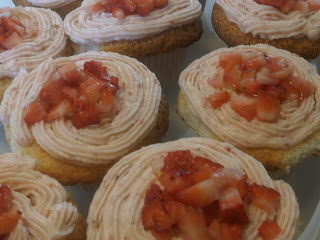 These tasted absolutely amazing! You guys need to try this icing recipe and it's extremely pliable! Tell me what you put in it! Better yet, tell me what I should put in it! I'm already thinking of redoing my mango-coconut devilfood cupcakes with this icing instead of buttercream. What do you think?
Posted by Unknown at 9:00 AM