Hi all! I miss you (and doing my nails) but I want to keep these aurora nails for as long as possible before they die off. So far only ONE has shown tipwear and subsequently chipped but the rest still look alright (though my nails are getting uncomfortably long). Seche is doing it's job!

Instead today I wanted to show you a project I took on for Christmas. Since this semester I made a set amount of money and wanted to save most of it, I DIY'd some of the gifts I gave. One of my boyfriend's auntie's told me the year before that she really likes handmade things so I thought of painting a box for her. I bought a wooden box from Michael's and some acrylic paints (that double for nail art hehe) and got to work.

I painted it blue. 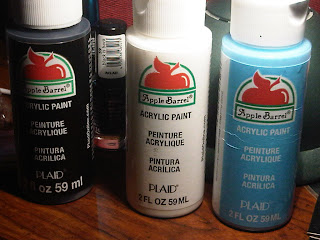 Then I drew an outline of what I wanted to do on the top. I googled pictures of hummingbirds and got this as an amalgamation of what I liked. 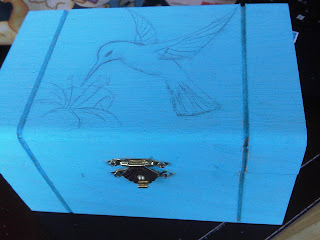 And at this point I got totally into it and didn't take step by step pictures. I used acrylic paints for everything except the chest feathers of the hummingbird - that's Julep Melissa. The black butterfly bodies were Sharpie, which is a bad idea because Wood Lacquer melts it. I fixed it afterward with some more paint and used my black striper instead. I freehanded everything except the hummingbird in the middle and that flower that unfortunately looks like a rafflesia instead of a lily but you can't win 'em all. 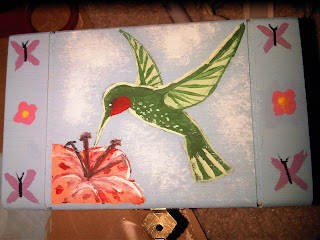 I freehanded my sunflowers and my impatience actually worked out well. I put down yellow, then the brown when it was dryish, and then flicked out from the brown circle to make petals. The brown dragged out a bit and gave them some depth =] You can see my Snowman peeking at you =P 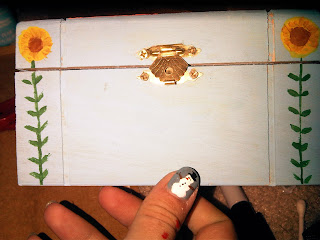 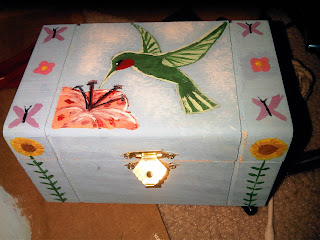 My workspace! You can see both boxes I'm painting. Can you guess what shitty movie I watched while high on paint? 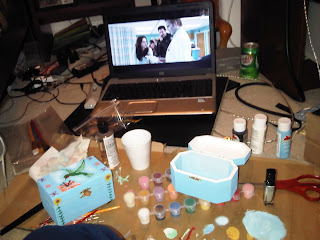 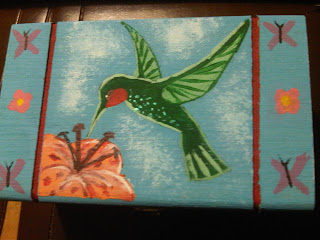 I dry dabbed some flower-y things, and the butterfly here is actually China Glaze Riveting =) 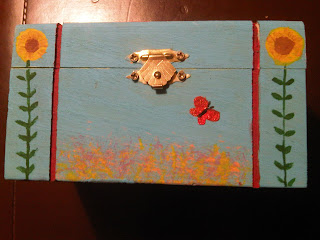 On the back, I put my little to-from =] It smudged horribly after the wood lacquer, as did the bee trails but I fixed it up and it looked better after. 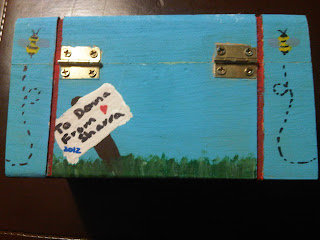 The sides, which I used paint to do, but should have just sharpied. 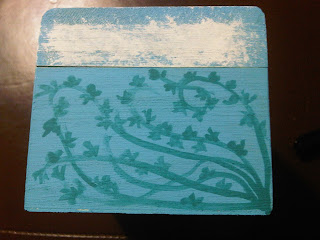 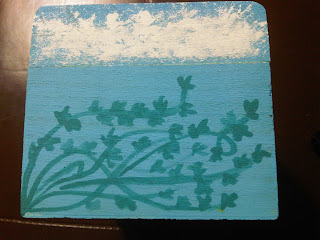 So there it is =] I'm so proud of it, and I surprised Branden by being able to do it at all. Psht, no faith from that boy. He should have known better after the dragon.

I did another box though! This one was much harder for me! I didn't know what to do for Branden's sister. I bought this box in this shape with a clear idea that I wanted to put her name on the top, but other than that, complete loss. 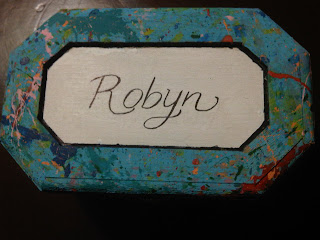 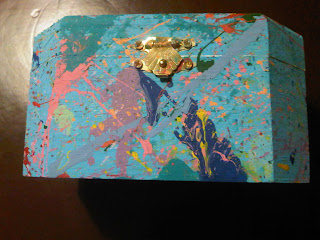 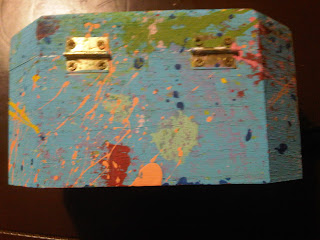 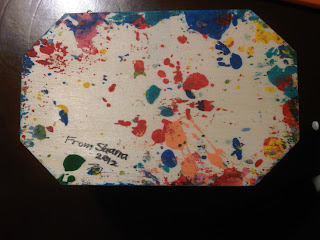 It was actually a lot harder for me than I thought it would be! I don't like getting messy! My pants still have spots on them, but I put my old lab coat to good use xP I actually really like the bottom. I think she thinks I didn't put as much work into it as I did on her Auntie Donna's but if there was less "work" there was more thought. This was the best I could do. Auntie Donna's didn't take much thinking for me, it was just doing.

What do you guys think? Do you do any crafty things for the people you gift? Any requests on boxes? It's so cheap to send things in the US if I drive over the border that you might just get a surprise in the mail one day ;)
Posted by Unknown at 12:04 AM