I'm doing the catch-up grind, have you noticed? After this I can slow down a bit because I'll be on track but if that's the reason I sucked so hard at this dotticure, then I'm sorry. In my opinion, I just kind of suck at all of them... except the fish... Wait... that's the only other one I did. Okay so it's just this one == I'm sorry!

I started with Julep Leslie, which as I mentioned reminds me of wet cement. I live near Vancouver, and we are famous for RAIN (over here anyway) and I have a lot of bus stops to walk to in this rain.. or snow, or mist, or other wet weather. Fall is always better for it because the leaves strewn on the sidewalks are gorgeous in colour, and that's what I was trying to capture here. 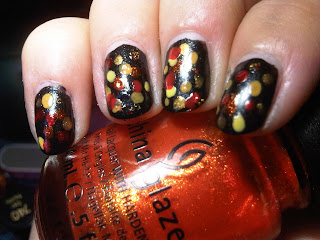 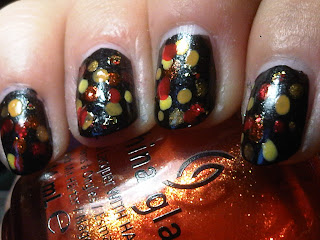 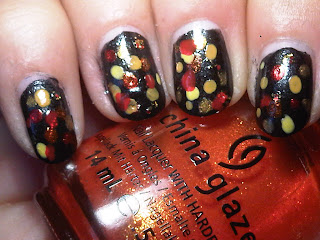 I basically just took my larger dotting tool because I knew the dots would come out different sizes and I poked at my nails randomly with different colours. I used Julep January and Parker, China Glaze Riveting and Electrify, Essence Wanna Be Your Sunshine, KleanColor Bright Gold. Apparently I completely forgot about China Glaze Harvest Moon, because I didn't use it. Lame.

Whenever I do something like this where I don't like it and it's a bit of a mess I cover it up with glitter. In this case, Sally Hansen Urban Chic, a scattered holo topcoat you've seen before on my Galaxy Nails. From afar, all you see is fire colours and rainbow glitter. 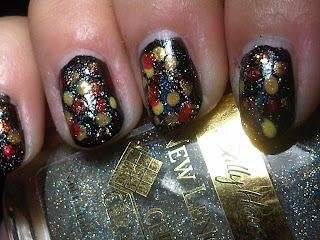 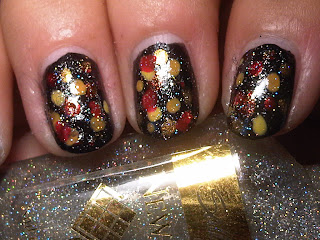 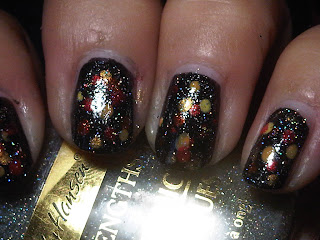 So in conclusion, for me this is "meh" and everyone else in the group is way better at dotting than me =P I used the peel off glue basecoat though so it'll be off by tomorrow and I can do something else.

When I went outside, I found it looked a lot better...
I like it a lot more outside.

[Side Story
My boyfriend said: "Leaves on pavement isn't really my first thought looking at these..."
Me: And that's the difference between 'based on' and 'inspired by'." AMIRITE?]

What do you think? Total fail? What would you have done differently with this idea (keeping it mind the use of dotting tools was mandatory)?

Everyone else's is SO CUTE >_<
Hannah from Polished Prisms
Stephanie from A Little Polish
Suer from Creative Nail Design By Sue
Katee from A Girl And Her Polish
Ashley from One Nail to Another
Karine Assemien from Karine's Vernis Club
Kayono Lan (aka Johanna) from Neues vom Kellerkind
Charlotte-Louise from Charlotte's Nails
Alyson Epstein from Beads. Nails. Food.
Maribeth from Obsessive Cosmetic Hoarders Unite
Becky from Glam Fiend
Angie from Our Painted World
Alethia from Never-Ending Nail Art
Sarah from Dakila's
Amanda from Mandy's Polish
Lisa from Lisa's Nail Obsession
Kelly from Nails for the Sake of Sanity
Stephanie from All Things Beautiful
Martina from From Head to Foot