As you who read the blog have seen, I kind of quite like Julep polishes and since not having a job this semester (for the first time since grade 12) I have some extra time on my hands since I can procrastinate a little more. I started looking around and came across some really really cheap pretty ones online, only to find they weren't in Canada.

I also just started my reading break, and Branden and I have been having some pretty boring weekends. So on Friday I proposed we go to the states on Saturday (yesterday). And then we did. For some reason, things just work out AWESOME for us when we don't plan ahead.
Conversation with Border Guard:
BG: So where is she taking you? (Branden was driving)
Branden: Lynnwood.
BG: Oooh, an expensive one.
Me: Yeah, you're just the driver.
BG: Aww, no, he's also the bank roll.

Easiest pass ever. We managed not to get lost on the way, and we didn't get lost much after either. So first we pulled in on 44th to go to McDonald's for the bathroom. And we looked out across and saw Old Country Buffet! I've never been but Branden has and said they have EVERYTHING (and they did) but since it was only 10am we decided to try to get some of our shopping out of the way. Off we went for Games Workshop but it didn't open 'til noon, so we went to kill time.

We headed to Walgreens and that was sad. I was looking for Sinful Colors brand and I had a list of the colours I wanted but they didn't have anything but the "Heartbreaker" selection. Sigh. So that was a bust.

I think then we went for Ulta, since it was still early. We couldn't really see it but we did see Barnes and Noble and decided to go in there. We pulled in and lo and behold, ULTA was beside it. Squee!
So I got some pastels, and like the picture says, some ULTA nail polish in a grey-blue, a flat medium green, white (!) and clear. Sorry, I don't have them handy for the colour names. I also got two of Essence Choose Me! because it was a mini ($0.49 and $0.99) and I knew I would like it to death.

One of the polishes we saw was kind of cool. It was magnetic nail polish. You put it on and then put the magnet on the lid by it and it aligned and made stripes. It was kinda cool but expensive so I didn't get any.
After this we went into Barnes and Noble and Branden spent ~$40 and I got Kushiel's Chosen for ten bucks.

It was about noon so we went to Old Country Buffet and it was AMAZING. It was $16 for both of us to get in and they had everything. I stuffed myself and was sad I couldn't eat more. We walked across the street to Games workshop then and it was quite busy with people painting and playing. We spent like 45 minutes in there and Branden got his new vampire book and an undead dragon which actually doesn't look incredibly stupid. 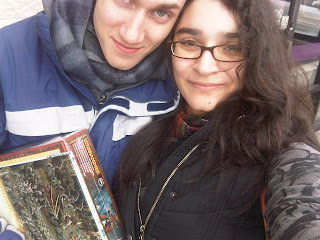 He gets very happy and started holding onto me after he spends a lot of money on Warhammer xD.

(He says it's to prevent me from running away from his massive nerdery, which is also his reason for constantly feeding me delicious food and homemade cream puffs.)

We headed to Alderwood Shopping Centre. There is possibly more parking than West Edmonton Mall. They don't even waste space on ramps in the complex, there is parking ALONG the ramp.

We went into JCPenney, macy's, Nordstrom etc and nothing was that interesting. The first thing we did however, was head to the bathroom. Branden waited outside while I went in and down this winding little hallway there was a waiting area. Not just like a small little area people can stand, it was a full on carpeted area surrounded by couches with kids toys in the middle. Y'know, those coloured tracks with balls and stuff attached from dentist/doctor's offices? Yeah. It was huge. There was also a little undoored room with sinks and change tables.

Eventually I got over that and Branden and me went into Spencer's and he saw a wallet he eventually went back to buy. It's really nice and it's the same style as his Batman wallet except it's got Link's triforce on it and it says "Legend of Zelda" on the back etched in gold. That was exciting.

We also went into Hot Topic which was next door. I think if I could work in Hot Topic I could have a satisfying retail career. The girls were dressed like I dress for Sanctuary and they had facial piercings and were just super nice. Branden tried on skinny jeans but his knees are knobbly from skidding around soccer fields and it looks weird.

While he was trying on jeans, I was pointed at.... their nail polish selection. Guess what? BOGO! I got four for $8. 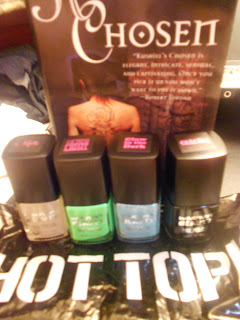 In the back is Kushiel's Chosen, the book from Barnes & Noble and in front from left to right is Matte topcoat, Black Light neon green, glow in the dark blue and crackle black. I think I win at life.

We walked around, and also found this store called American Girl which was really creepy/fascinating. They just had dolls. The dolls are like $105 and then you buy them outfits and stuff like build-a-bear. It's a mini-me for kids. You choose the face and the hair colour and the hairstyle and then some clothes that show personality. We spent some time looking around. It was weird. (They also sold cupcakes.) There's also an online aspect, like Webkinz. Playing on their website, to get a doll clothed and accessorized (and buy the doll) costs ~$228 for me. That is a lot of freaking money. And people complain about build-a-bear...

After Target (which was sold out of Sinful Colors and Tazo Tea!!) and Kohl's, which wasn't that interesting, we got tired.

Since we weren't hungry we decided to head back and stop for food when we stopped for gas. We got off the I-5 at the first Everett exit and got gas, then looked around for food. Everything was stuff we had in Canada so we went to a hole in the wall place called Shake 'n' Go. 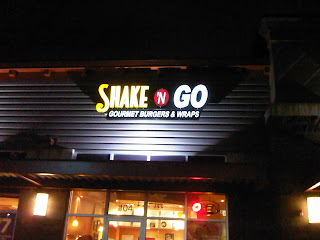 Oh man, stuffed and happy, we headed home and that was the end of that. We should never plan anything ever again.